Since reading a bit about diet and nutrition and fasting, I thought it would be fun to try a proper fast myself. Firstly I think it’s probably a pretty useful treatment for type II diabetes and I wanted to see what it was like to see if it’s something I could recommend. Then, Tim Ferris’s podcast was quoting Seneca (I think), saying the way to not fear being poor, was to live as a poor person for a week, eating simple food and wearing plain clothes, so (summarising) that makes fasting a philosophical exercise. And Herman Hesse’s Siddhartha also described the importance of being able to fast so that, not needing to be busy chasing after food, you can sit back and let opportunities come to you. I haven’t read the novel, but I came across that passage somewhere.

So I wanted to try fasting too.

I started small. I did a few one day fasts on Sundays in the first half of 2017. I was thinking about it quite a bit but I got started almost accidentally, I decided to not eat till 12, I ended up going for a walk in the park at that time so I missed out on eating lunch, and while walking I felt so well and energetic, that I just carried on for the rest of the day.

As background, I should point out that I don’t have any health issues myself, I’m not diabetic and I’d been eating low-carb high-fat for four years at that point. I.e. replacing bread, potatoes, rice and pasta with vegetables, eating the full fat version of food, but then sticking to this only around 85% of the time. So I’m probably more adjusted to burning fat than the average person.

After that start I carried on with one day fasts on Sundays and these were reasonably easy, though I did have a tendency in the evenings to remember that the local shop which is open till late and I had to remind myself that I wasn’t not eating because I forgot to buy food, I was not eating deliberately.

Then in August 2017 I tried a five day fast. I didn’t know what the effect would be and I was afraid I might faint at work, so I waited till I had time off. I initially intended to do three days, but the book on fasting I bought said the first three days were the hardest and there was no point stopping there and in their clinic they only recommended 7 or 14 day fasts, so I carried on! My stop time was defined as the day before work as I had no clue how my body would respond to eating again. The book was Jason Fung and Jimmy Moore’s The Complete Guide to Fasting.

So I ate nothing whatsoever for three days, but drank plenty of  water and had my normal amount of black coffee, i.e. one or two cups a day. On the fourth and fifth days I also included bone broth. I boiled up two or three bones for hours on end and added veg to the mix. However, I was very careful to filter out any solid food, more for the principle of the thing, as there is plenty of fat in bone marrow, so I was getting some calories there, as well as, I assume, plenty of minerals. These weren’t marrow bones though (i.e. the bones were narrower) so there was less fat.

I can’t work out if my five day fast was easy or hard. In some ways it was easy, I wasn’t too hungry, I could happily watch other people eat (I only tried it twice), I wasn’t cold, I didn’t feel the slightest bit faint, I felt pretty well. In some ways it was hard, I felt slightly under the weather, if you imagine a mild cold I’d say I felt half as bad as that. Without feeling hungry as such, I spent the evening of the fourth and fifth days imagining how much I would eat on the sixth day, though in the morning of the sixth day I felt fine and didn’t eat till an hour after waking up. Of course I saved a bit of time and money on eating.

I actually found the first thee days easier than the second two days though. By the fourth day I was getting pretty peckish and as my fasting book recommended bone broth I did make and eat that. I did eat the broth with quite an intense concentration, which was funny to ‘watch’.

When I started eating again I didn’t do anything complicated. I started with a small version of my normal breakfast. Normally I have two eggs fried in a lot of butter and this time I had one egg fried with very little butter (I have a vague impression fat is bad for delicate stomachs). I felt really fine and normal and two hours later I had a normal breakfast, i.e. two more eggs fried in butter. Later in the morning when I was out and I promised myself that if I wanted a croissant I could have one, then I totally forgot to buy one! After that I ate normal meals in what felt like a normal quantity, but again, I did have that strong concentration while I was eating on the first day and felt totally uninterested in the salad. I think my body thought salad leaves were a pointless waste of time with too few calories to be worth eating. After that I carried on as normal. No problems.

So annual… ? Yes in 2018 it was time for next fast. This time I made it a seven day fast in July. As I had been so well in 2017 and didn’t faint at all, I fasted while working as normal (I only have an office job). In fact I highly recommend being in work as it filled up my day, kept me distracted and busy and this seemed to made things much easier. I started on a Sunday and though I did feel a bit tearful in the evening about my laptop, I really think it was nothing to do with food and was just about how annoying my laptop is.

Again I had as much water as liked (mostly fizzy water) and the normal amount of black coffee (two americanos a day). This time I didn’t have any bone broth.  I do think fasting was easier this time and that my body is getting into practice.

I also thought of it as a physical challenge, like running a marathon. Every time I felt a bit miserable, or fed up (especially on the Wednesday afternoon, day four, while working from home), I thought: ‘would I rather do a two mile run?’ No I would not. Obviously I appreciate that training for a marathon takes more than two mile runs, but even a two mile run seems harder and more unpleasant than fasting. That means this is a physical challenge I can do while sitting on the sofa! Best challenge ever.

I preferred to spend the fast quietly at home in the evenings, as it seemed like a good combination with a bit of a retreat from the world. Plus I didn’t want to join friends in restaurants, though I was happy with the idea of soda water in the pub. However, on the Tuesday (day three) I did join a friend for a three hour walking tour of central London, so I don’t think I was low on energy. Again I felt well, and normal, no faintness, no coldness (it was the middle of a heatwave), no problems with concentration at work or at home. I felt a bit ‘faint hearted’ like faint headed, but around my heart, for a short time in the shower one morning, but that was pretty much it for physical symptoms.

I kept a careful eye on my weight. If I had dropped below 60kg, I would have considered stopping the fast. As it is I didn’t even get to the bottom half of the healthy weight range for my height. Though I lost quite a bit of weight, it was evidently mostly water, as it snapped back on again once I started eating again (though I kept hydrated and drank plenty). It’s quite interesting to see my weight return right back to the original amount (or a hair lower) without me paying any attention to the amount I was eating. 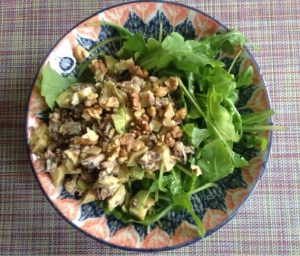 I have to say I really enjoyed my first meal. I had a whole avocado mixed up with a tin of sardines on a bed of rocket with olive oil, salt and pepper and a few walnuts (I’d say that was about double or 1.5x a normal quantity). When I sat back with my full tummy I felt so happy. Like imagine if you’d given up coffee and chocolate and TV as a challenge, and then after you were done, you sat in front of your favourite programme with a coffee in one hand and chocolate in the other… that’s how happy I was. I think this is literally due to serotinin production by my gut, if this is the case, that’s pretty fast work.

The thing is though that neither coffee, nor chocolate nor TV are essential. I actually took this to mean that as much as I enjoyed eating again, I had a lot more than seven days worth of food stored on me. We’ll see what a fast is like in 2019! I also need to make more of an effort to do exercise on the first day, like a two hour walk, to get me into ketosis quicker. And in the past, on two occasions, it really is the combination of not eating and exercise that has made me feel really well, even euphoric.

So in summary, I’d definitely recommend fasting as an exercise in philosophy or as a physical challenge to see what your body is capable of. If anyone is interested in fasting, but worried it might be unsafe, I’d say, start small. Start with just fasting till noon, then go up to one day at a time and learn about it as you go. Remember, when you feel hungry, it’s not a straight line up. You won’t feel more and more hungry. Its more like a curve that goes back down again. So if you can wait that out, you will feel comfortable again. But if not, just eat, and learn more and try again later. After all we were born in the crucible of evolution, our bodies can do a lot more than we think.