The title is inspired by my feelings when walking through the new bits of Kings Cross between York Way and Caledonian road. Glossy but anodyne buildings renovated at a high cost by investors to rent at a high price, which results in £7 beers (those high rents aren’t magiced out of nowhere). In a perfect world the area would have been built up by the business owner, making profits out of the turnover of the busines and investing it in better buildings. (I don’t know if that’s what happened, that’s just how it looks).

This is something I thought of after going to the London Fairness Commission event, Is London a Fair City at Guildhall this evening. The debate is ultimately derived from the ideas in the book The Spirit Level, Why More Equal Societies Almost Always Do Better.

There were a number of interesting ideas. The London Bridge Trust maintains five bridges but has so much money they have widened their charitable remit (but they still maintain the bridges). Even though housing was supposed to be  the third item it kept bleeding through to earlier items.

Inequality has gotten better since 1915, so we should stop making a fuss. Even though it got better because of changes after the wars that have been going backwards.

If rich people pay more tax we should consider that job done, and not worry about why they have so much money to pay more tax with. It would also help if you clarify whether they pay more in absolute numbers (yes) or a percentage of their income (not so much) This ties into an idea that wasn’t discussed. Everyone was very keen on a proper living wage. Businesses are not keen on this, otherwise they could voluntarily pay more. At the same time they pay low wages, they post profits. This is basically a choice we can make; should that money go to wages or profits. The thing is that wages, especially of poorer people, go straight into the economy as people buy stuff to improve their standard of living. While profits could theoretically go into the economy too, by being invested back in the business, in practise investment in the real economy has stagnated over the last 30 years and profits are more likely to go in to the financial markets. Therefore if businesses pay higher wages and post smaller profits, the economy will be better off (nef has done the analysis). And while you might worry about what spending on ‘stuff’ will do for the enviroment, if we bought leisure, or experiences, or services we can lighten our load on the environment (see Stuffocation, we can save the enviroment without needing the human race to suddenly become perfect).

The final question was a few votes, leading up to whether we should build in the green belt. A poll of the attendees showed a huge majority in favour of rent controls. I’m even a bit reluctant to mention that because the idea has been so thoroughly demonised that I’m afraid people will write off the whole debate as [left wing slur]. But I’m going to go ahead (wait I already went ahead). Almost nobody was in favour of freeing up planning control, probably because only the developers would profit and we are sick of loosing our best buildings (Waitrose in Holloway, I’m looking at you). Finally a few more people were in favour of building in the green belt and that is the craziest part. Why do we want to build in the middle of nowhere or zone 7, or wherever the green belt is, when we could build in zone 2, where the jobs are and the infrastructure already exists. Compare these two screen shots of Islington and Prenzlauerberg in Berlin (where I lived, three stops from Alexanderplatz), a pretty good bit of Berlin that is gentrified because everyone wants to live there. 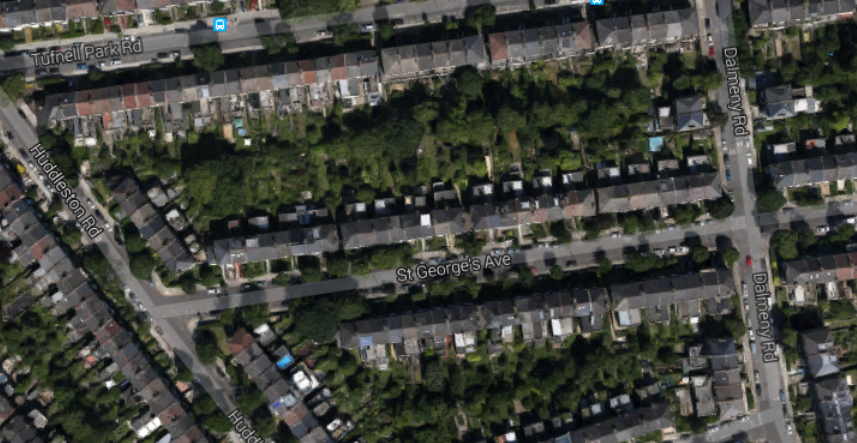 And bear in mind most houses in Islington are three stories while every house in Berlin is five stories with handsome high ceilings all the way up. And interesting little shops and cafes everywhere, because they have the people to shop in them. I’m not saying there is an easy solution to this because I’m not sure building an extra house in the back of every garden will work and I don’t want to knock down handsome Victorian houses, and so many modern buildings are hideous, but, but, but, but, Zone 2 can fit more people in (Waitrose in Holloway, after knocking down a five storey building to build a two story one, I’m looking at you). So no to Greenbelt building, commuting never made anyone happier.

1 thought on “Why do I feel like London is built by the renters for the investors?”