In my previous post I mentioned that one of the unpredictable things Pounstone’s book can predict is the stock market. As the whole thing runs on people (not numbers) that sounds quite doable.

Poundstone doesn’t explain the first step, though Pete Comley does in his excellent book Monkey with a Pin. This book was inspired by the observation that 85% of fund managers don’t beat the market. Hence the value of index funds, which are the market.  When I first found out what an index fund is a few years ago I naively thought it was a new invention that would devastate the city. If people can get the same or better results for less money why wouldn’t they? I guess if psychics can earn money, and if there are whole professions where the experts guess right less often than chance, the fund manager doesn’t have to worry.

So Pete Comley pointed out the very important point that half of the ‘growth’ of the stock market is just inflation. Perhaps ‘just’ inflation is unfair. Inflation proofing an investment is pretty useful. Though Pete Comley showed that if you put cash in the highest interest account you could find, once  a year, then over the last 20 years (not including current low rates) you would actually also beat inflation.

So if you invest £17,250 and 23 years later you have £27,500, that looks like a respectable 4.2% per annum gain, but if inflation averaged 3.5% that was really only a 0.7% gain. Comley further calculated that overall per annum return on investment over the last century, after subtracting out inflation,  is 5% and average investement costs are 6%, giving overall returns of minus 1%, which would look perfectly respectable after inflation, say,  4%.

So beating inflation is not to be sneezed at. Actually since reading Monkey with a Pin I think Poundstone is the first person I’ve read who discusses the value of markets after adjusting for inflation.

If fund managers are not beating the market and the market is going up anyway because of inflation, which you get for ‘free’ just by owning unmanaged shares, then the next step is to minimise costs.

If you have an index fund of the market that is going up 5% a year with 0.5% annual fees (the maximum you should pay for an index fund, you might get a little less) and you compare it to a fund that is consistently beating that index (the market) by 1% a year, 6% overall, but which charges 2%, then I don’t even need to plot the graph to show you that lower fees are more important than small gains.

I like graphs so I’m going to plot it anyway. 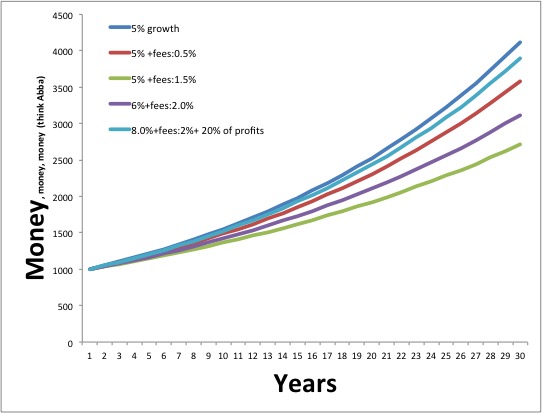 See how compounding interest doesn’t make much difference for the first 10 years and takes off after 20 years. But look at the huge difference when costs are 0.5% (red) vs costs of 1.5% (green). A mere extra 1% knocked almost a quarter off the final income. And while the expensive hedge fund at 2% interest and 20% of profits (purple) did beat the index fund, it would have to beat the market by 3% consistently for 30 years. Good luck finding a manager who is in the top 15% for 30 years running and who won’t retire in that time.

There are a lot more to the costs that I didn’t discuss (if the market goes up by 5% and fees are 0.5% you get less than 4.5%)and I didn’t even get round to the superspecial unpatented Poundstone method to beat the index funds. That’ll have to be another post.